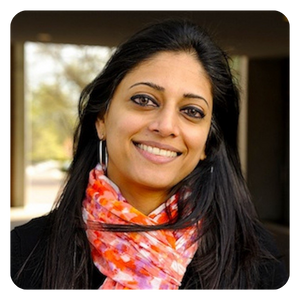 Sridevi Sarma received a B.S. in Electrical Engineering from Cornell University in 1994; and an M.S. and Ph.D. in Electrical Engineering and Computer Science from Massachusetts Institute of Technology (MIT) in 1997 and 2006. From 2000-2003 she took a leave to start a data analytics company. From 2006-2009, she was a Postdoctoral Fellow in the Brain and Cognitive Sciences Department at the MIT. She is now an Associate Professor in the Institute for Computational Medicine, Department of Biomedical Engineering, at Johns Hopkins University. Her research includes modeling, estimation and control of neural systems using electrical stimulation. She is a recipient of the the Burroughs Wellcome Fund Careers at the Scientific Interface Award, the Krishna Kumar New Investigator Award from the North American Neuromodulation Society, and a recipient of the Presidential Early Career Award for Scientists and Engineers and the Whiting School of Engineering Robert B. Pond Excellence in Teaching Award.

We have developed and validated a noninvasive EEG marker of epileptogenicity. Patients will be more accurately diagnosed and more effectively treated immediately after their first seizure occurs.

Today millions of scalp EEGs are performed each year to aid in the diagnosis and treatment of epilepsy. Despite nearly 100 years of using this technique, clinicians still primarily evaluate scalp EEGs by visual inspection. They look for abnormalities in EEG waveforms called interictal (between seizure) epileptiform discharges (IEDs), which are known indicators of epilepsy. EEGs are typically captured for 20-30 minutes while the patient is not seizing or is “at rest”, and thus abnormalities may not occur in such a brief window. Furthermore, during this monitoring period artifacts are prevalent, which can mask true IEDs. Overreliance on and misinterpretation of routine EEGs has been found to be a significant factor in the nearly 30% misdiagnosis rate of epilepsy, contributing to approximately $1 billion to $6.4 billion in annual costs in the US.

We have developed EPITrack-RS (RS stands for “resting state”), a novel EEG analytics software tool that improves the speed and accuracy of determining whether a patient is epileptic from EEG data captured while the patient is at rest (not seizing). EPITrack-RS constructs a dynamic network model of the patient’s brain from EEG recordings and identifies pathological connections between network nodes (biomarker) in the network that are displayed as a heatmap for clinicians to interpret. EPITrack-RS produces heatmaps in minutes and has been evaluated on over 300 patients and has demonstrated 80% accuracy in distinguishing between PNES and epilepsy patients even when normal EEGs are normal (i.e., no IEDs present). This is significant as normal EEGs are otherwise unactionable by clinicians.

One may wonder how resting state EEG captured from epilepsy patients can reveal any abnormalities in the brain when they are not seizing? This is precisely the challenging question our study addresses. Current approaches view the epileptic marker discovery process as a signal processing or pattern recognition problem, concentrating on processing EEG observations to find events of interest on individual channels (e.g., IEDs). Instead, we seek to understand how the EEG observations are generated in the first place and how internal network properties can trigger seizures or prevent seizures. Conceptually, EPITrack-RS finds EEG patterns which are below the threshold of traditional visual interpretation. Dynamical network models derived from EEG data characterize the internal properties of the brain and are necessary to reveal the epileptic network connections and the underlying dynamics of seizure generation.

EPITrack-RS has the potential to change clinical practice, reducing social and economic costs associated with misdiagnosis. Early use of anti-seizure medications after accurate diagnosis of epilepsy has been associated with a decrease in seizure recurrence, and early access to psychotherapy after accurate diagnosis of PNESs has been associated with increasing a patient’s quality of life – ultimately benefiting all individuals affected by epilepsy, their caregivers, and their families.