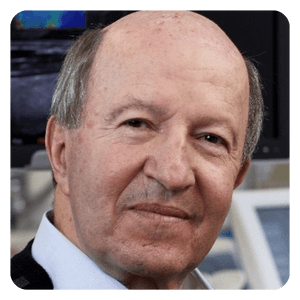 Mathias Fink is the George Charpak Professor at the Ecole Superieure de Physique et de Chimie Industrielles de la Ville de Paris where he founded In 1990 the Laboratory “Ondes et Acoustique” that became in 2009 the Langevin Institute. He is member of the French Academy of Science and of the National Academy of Technologies of France. In 2008, he was elected at the College de France on the Chair of Technological Innovation. Mathias Fink’s area of research is concerned with the propagation of waves in complex media. His current research interests include medical ultrasonic imaging, telecommunications and wave control in complex media. With his colleagues, he pioneered different inventions in the field of medical imaging (ultrafast ultrasonic imaging, transient elastography, shear wave Elastography, supersonic shear imaging) and in telecommunications (Time-reversal processing and Large intelligent surfaces). 7 start-up companies with more than 500 employees have been created from his research (Echosens, Sensitive Object, Supersonic Imagine, Time Reversal Communications, CardiaWave and GreenerWave, Austral Diagnostic).

Recent developments of ultrafast ultrasound imaging scanners open very exciting possibilities in the field of medical ultrasound.  Thanks to a completely new approach based on the concept of “time-reversal mirrors”, frame rates as large as 10.000 frames/s are reached today. Compared to classical ultrasound scanners that delivered some 50 frames/s these new possibilities represent a complete breakthrough and a new paradigm. We will describe various innovations that leverage ultrafast ultrasound imaging.

The first one is a new imaging mode that provides quantitative imaging of tissue elasticity by following the propagation mechanical shear waves with a spatial resolution and precision that were never obtained with classical techniques. This is the field of Shear Wave Elastography that shows many applications in cancer diagnostics, fibrosis evaluation as well as cardio-vascular applications.

A second innovation is a new way to perform Doppler flow imaging with ultrafast scanners. It gives ultrasound the ability to detect very subtle blood flow in very small vessels. In the brain, such ultrasensitive Doppler paves the way for fUltrasound (functional ultrasound imaging) of brain activity with unprecedented spatial and temporal resolution compared to fMRI. Examples will emphasize the potential of this new imaging modality.

A third recent innovation combines ultrafast imaging with the use of airborne low frequency ultrasound providing the first non-contact scanner of the body surface vibrations to diagnose and monitor both cardiac and pulmonary disease.