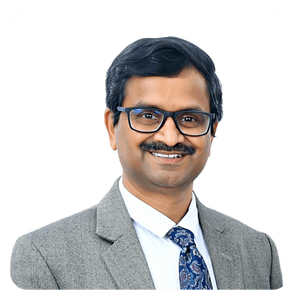 Gondi Kondaiah Ananthasuresh, a professor of Mechanical Engineering and the Dean of Mechanical Sciences at the Indian Institute of Science-Bengaluru, earned his bachelor’s degree from Indian Institute of Technology-Madras, master’s from the University of Toledo, and PhD from the University of Michigan-Ann Arbor, all in mechanical engineering. His research interests are compliant mechanisms and topology optimization with applications in microelectromechanical systems, mechanics of biological cells, biomedical devices, and microrobotics. In addition to more than 300 journal and conference papers and 16 patents, his research group has spun off four startups. His work is recognized with 15 best paper awards, 10 design prizes, and NSF’s (USA) Early Career Award, SAE’s Ralph R. Teeter Educational Award as well as Swarnajayanthi Fellowship, Shanti Swarup Bhatnagar Prize, and Abdul Kalam Technology Innovation National Fellowship in India. He is a Fellow of the Indian National Academy of Engineers.

The premise for mechano-diagnostics at the level of single cells harks back to early 20th century when researchers, including Francis Crick, investigated the physical properties of biological cells (Expt. Cell Res., 1(1), 1950, pp. 37-80). A biological cell, being a complex entity with passive and motile particles co-existing with filaments of varied sizes and shapes jostling about in a viscous fluid, gives different mechanical response depending on the composition and arrangement of organelle. It is akin to a heterogeneous solid made of a granular medium. Physics, mechanics in particular, contributes to a cell’s response in addition to complex biochemical phenomena. Measuring the mechanical response needs tools and computational techniques. The cells must be kept alive when they are physically measured. And the tools should be portable, simple, and not expensive to be suitable for point-of-care diagnostics. Micromachined compliant tools rise to the occasion.

The field of microelectromechanical systems (MEMS), which began in the later part of 20th century, has revolutionized the field of sensors by miniaturizing them using photolithography-based microfabrication. Alongside, several miniature actuators and mechanisms were developed. Thus, researchers have access to a “micro workshop” to probe single biological cells from the viewpoint of mechanics. Even though early microsensors and microactuators were made of silicon, we now have several polymers available, for example, polydimethyl siloxane (PDMS) and SU-8, which we use. These materials have sufficiently low Young’s modulus to design compliant tools with stiffness that matches that of biological cells. Compliant tools we have developed have stiffness as low as mN/m. These tools use compliant mechanisms, which are elastically deformable structures without any joints and designed to perform manipulation tasks such as grasping, rotating, stretching, peeling, etc. In this talk, we demonstrate a variety of such tools and describe how they can be used to manipulate single biological cells. The main idea is that we palpate cells with stiffness-matched tools the same way a physician would palpate abdomen to assess if something is abnormal. Microfluidic tools also exist for this purpose, which we will briefly describe for comparison.

Palpation of cells necessitates not only miniature tools but also force sensors and computational techniques. Towards this, we have developed a micro-newton force sensor that works on a vision-based technique. We observe the amplified displacement of a miniature compliant mechanism and estimate the force. This is akin to a normal spring balance wherein the displacement of the spring multiplied by the spring constant gives the force. Here, we design Displacement-amplifying compliant mechanisms (DaCMs) to gently manipulate the cells and measure the forces applied on the cells or the forces applied by the cells.

Computational techniques we have developed for our miniature compliant tools come under the inverse problems in elasticity. The first inverse problem is to compute forces from the visually measured displacements of an elastic body undergoing geometrically nonlinear deformations. This is known as Cauchy’s problem in elasticity. The elastic body here is the miniature compliant tool. This helps measure the force on cells minimally invasively. The second inverse problem is that of finding the Dirichlet to Neumann map of an elastic body. Here, we treat a biological cell an elastic body (which is an oversimplification for mathematical convenience) but made of a heterogeneous material. We estimate the elastic properties of the interior of a live cell from forces and displacements applied on the boundary. Here lies the question of uniqueness. So, we have arrived at a numerical technique to find the inhomogeneous elastic mapping of the cell so that we can determine specifically which parts of the cells have contributed to changed stiffness. After describing the mathematical modeling of inverse problems, a case study will be presented to illustrate how mechano-diagnostics helped in pinpointing proteins that play a role in Hepatitis C Virus-affected hepatocytes.

We present a study in which mechanical measurements showed that nuclear envelope of hepatocytes affected by HVC becomes more flexible while the cell membrane becomes stiffer than normal hepatocytes. We identified that Lamin-A,C proteins are downregulated while cortical actin is upregulated. Furthermore, we have developed a mechanical model that gives us the mechanical status of cell nuclei from simple morphological measurements of nuclear volume, surface area, and projected area as seen in confocal microscope images.

Taken together, the miniature compliant tools, mechanical manipulation capabilities, computational techniques, and mechanobiology experiments help us assess the state of a cell from the viewpoint of mechanical response with reasonable specificity. Much more work is needed to reach mechano-diagnostics.