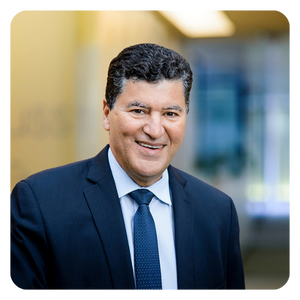 Elias Zerhouni, M.D., Professor Emeritus Radiology and Biomedical Engineering, Johns Hopkins University, Baltimore, Maryland, USA. Dr. Zerhouni was most recently the President, Global Research & Development, and a member of the Executive Committee for Sanofi from January 2011 to July 2018. Dr. Zerhouni’s academic career was spent at the Johns Hopkins University and Hospital where he was professor of Radiology and Biomedical engineering and senior adviser for Johns Hopkins Medicine. He served as Chair of the Russell H. Morgan Department of Radiology and Radiological Sciences, Vice Dean for Research and Executive Vice Dean of theSchool of Medicine from 1996 to 2002 before his appointment as Director of the National Institutes of Health from 2002 to 2008. In that position he oversaw the NIH’s 27 Institutes and Centers with more than 18,000employees and a budget of $29.5 billion (2008). In November2009, President Obama appointed Dr. Zerhouni as one of the first presidential U.S. science envoys. Dr. Zerhouni also served as senior fellow to the Bill and Melinda Gates foundation from 2009 to 2010 and senior advisor to the CEO of Sanofi. Dr. Zerhouni has founded or co-founded five start-up companies, authored more than 200 publications and holds several patents. He has assumed positions on several Boards, including most recently, the board ofthe Lasker Foundation, Research! America and the NIH Foundation. He is also a member of the U.S. National Academy of Medicine and the U.S. National Academy of Engineering. He received the prestigious Legion of Honor medal from the French National Order in 2008, and was elected in 2010 as a member of the French Academy of Medicine and appointed as Chair of Innovation at the College de France in 2011.

The core challenges facing the life sciences today are the enormous complexity of living systems and the need for more precise interventions. The nature of scientific inquiry in the life sciences is undergoing a profound transition driven by these two challenges.

Over the past decades, most research was focused on discovering the basic molecular components of living systems. Based on the efforts of small focused teams, led by creative scientists, our knowledge of structures and functions of the core elements of living systems has progressed remarkably. This phase of discovery is comparable to what happened in the physical sciences a century before, with the characterization of chemical elements, atoms and particles and the basic forces linking them. As molecular discoveries such as that of DNA, RNA, enzymes, G-protein coupled receptors and many others, it became clear that integrating these discoveries into a coherent understanding of living systems would require novel approaches of a scale and scope beyond the capabilities of traditional mono-disciplinary teams.

The emergence of larger multi-disciplinary R&D teams comprised of scientists and engineers trained in physical sciences, engineering, computing, data sciences and biology in a convergence of scientific fields is increasingly necessary to understand high complexity systems but presents challenges beyond those of more traditional reductionist approaches. These challenges in the life sciences can be divided into two distinct classes: 1: understanding of structure-function relationships at systems scale and 2: precisely modifying such structural and functional systems for defined benefits.