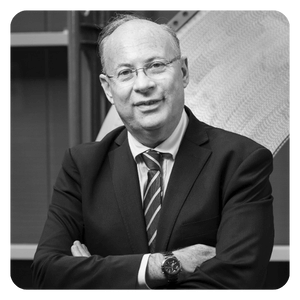 Denis Le Bihan, MD, PhD, is a widely cited physician and physicist (300+ articles with 70 000 citations including nearly 20 000 for the first top 5). He is especially recognized for pioneering diffusion MRI in the 1980s , setting up a complete technical and conceptual framework which has become a pillar of today’s medical imaging. Over the last 35 years Denis Le Bihan has continuously improved diffusion MRI and extended its field of applications. Indeed, diffusion MRI has been the object of countless publications and meetings, allowing many scientists, technicians, engineers and clinicians in academia, hospitals and the medical imaging industry to work to further extend its potential in the clinical field for the benefit of patients. Denis Le Bihan is the Founding Director of NeuroSpin in Saclay, France, a leading institution dedicated to ultra-high field MRI where he set and led the Iseult project (11.7T whole-body MRI). He is an Honorary member of the American Society of Neuroradiology and the Japan Radiological Society. He was awarded the Gold Medal of the International Society of Magnetic Resonance in Medicine in 2001, as well as other prestigious international prizes, including the Lounsbery Award, Honda Prize, Louis D. Award and Louis-Jeantet Prize. Dr Le Bihan, an Officer of the French Order of Merit, is a full member of the French Academy of Sciences and of the Academy of Technologies, and an Associate Member of the National Academy of Pharmacy and a corresponding member of the National Academy of Medicine.

Abstract – Science without instruments is the ruin of the soul

Innovation usually develops along two main lines. One is a cumulative process: Progressive, incremental changes in basic knowledge of certain concepts mature over a long time until suddenly a radical change occurs. This process applies well to classical radiology which led from the discovery of X-rays to radiography and then to the CT scanner. The other line is the discovery or development of a new concept initially without medical purpose. This is the case of MRI which came out of the blue from NMR which was an instrument used only for physics and chemistry. Another example is molecular diffusion, an ubiquitous physical phenomena occurring in the whole universe which, combined with MRI, provides exquisite information noninvasively on biological tissues at microscopic level, a kind of virtual biopsy. Regarding MRI recent advances have been made through technical progress is hardware (eg gradient systems, radiofrequency coils) and acquisition/processing methods (eg parallel imaging, sparse sampling or simultaneous multislice acquisitions), some already benefiting from Artificial Intelligence and Deep Learning approaches. Those advances have dramatically improved patient comfort and safety, mainly by shortening acquisition times, while providing a wider range of contrasts which can be manipulated and combined afterwards for diagnosis or disease monitoring purposes. Greatly benefiting from those hardware and software advances progress is now expected in magnet design here also along two opposite lines : Designing of ultra-high field MRI magnets (eg 11.7T or higher), mainly for brain investigations at ultrahigh spatial resolution, as the understanding of the human brain is a major challenge of the 21st century, and making low field, cheap, helium free, open, portable magnets dedicated to one application (eg breast cancer screening). In the early 2000s the French Atomic Energy Commission launched the Iseult project, a program to build a “human brain explorer”, the first whole-body MRI scanner operating at 11.7T. Since 2017 the outstanding magnet has been delivered and commissioned at NeuroSpin. The project aims, the system specifications, technological challenges and the solutions which have been chosen to overcome them are presented.