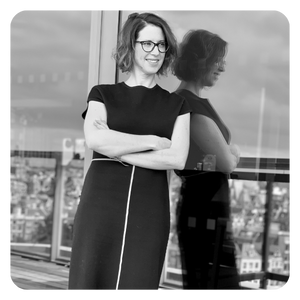 Aimee van Wynsberghe has been working in ICT and robotics since 2004. She began her career as part of a research team working with surgical robots in Canada at CSTAR (Canadian Surgical Technologies and Advance Robotics). She is the Alexander von Humboldt Professor for Applied Ethics of Artificial Intelligence at the University of Bonn in Germany. Aimee is co-founder and co-director of the Foundation for Responsible Robotics and on the board of the Institute for Accountability in a Digital Age. She is a 2018 L’Oreal Unesco ‘For Women in Science’ laureate. Aimee also serves as a member of the European Commission’s High-Level Expert Group on AI and is a founding board member of the Netherlands AI Alliance. She is a founding editor for the international peer-reviewed journal AI & Ethics (Springer Nature) and a member of the World Economic Forum’s Global Futures Council on Artificial Intelligence and Humanity. Aimee has been named one of the Netherlands top 400 influential women under 38 by VIVA and was named one of the 25 ‘women in robotics you need to know about’. She is author of the book Healthcare Robots: Ethics, Design, and Implementation and has been awarded an NWO personal research grant to study how we can responsibly design service robots. She has been interviewed by BBC, Quartz, Financial Times, and other International news media on the topic of ethics and robots, and is often invited to speak at International conferences and summits.